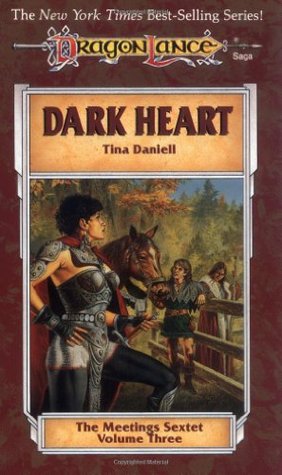 One spring day Tasslehoff Burrfoot comes to Solace, accidentally pockets a copper bracelet, and forcibly makes the acquaintance of Tanis Half-Elven and Flint Fireforge. A simple tale. Except that the fate of the entire race of Dargonesti sea elves hangs in the balance. How does this piece of kender-coveted jewelry lead the companions and a sea elf princess to ally with the phaethons, creatures with wings of flame?

The answer lies with a mysterious mage, a broker of souls, who knows the bracelet's secret At long last, the story of the beautiful dark-hearted Kitiara Uth Matar. This compelling novel tells the story of the birth of her twin brothers, the warrior Caramon and the frail mage Raistlin, and Kit's admirable role in their upbringing.

But her youthful mercenary deeds and increasing fascination with evil throw her into the company of a roguish stranger and band of adventurers whose fates are intermingled with her own. Haunted by the memory of her Solamnic father, she hunts him ceaselessly. Although Raistlin and Caramon urge him not to go, Sturm Brightblade attends an annual Solamnic ceremony that is interrupted by Clues from the past. Once he accepts a mysterious gauntlet, young Sturm must make a dangerous journey with some curious friends, rescue a fair if querulous maid, defeat a traitor knight, and learn the secret fate of his long-lost father.

He must also learn the meaning of honor. Life isn't simple for the hotheaded pair. They must contend with a carnivorous, two-headed troll; a deposed leader who believes Kitiara is the cause of the ruler's troubles; a vindictive mage who seeks peculiar vengeance; and Kit's hulking former lover. They also meet a beautiful magic-user hiding a painful secret, and a giant owl with a sardonic sense of humor. Caramon, Sturm, and Tasslehoff, on an innocent ship's errand, are blown thousands of miles off course by a magic windstorm and transported to the eastern Bloodsea. Caramon and Sturm are left for dead while Tasslehoff mysteriously turns against his friends Back in Solace, Raistlin convinces Flint Fireforge and Tanis Half-Elven that they must make a perilous journey to Mithas, the kingdom of the minotaurs.

Their task: not only to rescue their friends, but also to defeat the elusive Nightmaster. Get A Copy.

Other Editions Friend Reviews. To see what your friends thought of this book, please sign up.

I believe the author did a good job with the characters but I question her use of them. Tasslehoff is a personal favorite of mine and in this book the author had him act not as his normal self and this was on purpose as it was vital to the plot. I did not enjoy this plot arc at all. I believe this was an nice story but it needed a totally new cast of characters.

It did not work with our established characters. This wasn't the best supplemental book for this universe. I was looking forward to visiting these beloved characters but by the end I was wishing that they were not in this novel. I believe this book needed a breath of fresh air to be enjoyable. Jun 21, J. Cauthon rated it liked it. Once again, a Dragonlance novel that is nowhere as fulfilling as the original series. As this was part of a prequel series, I was not expecting it to go so overboard on the epic-quest concept.

Same names, supposed the same characters, but their actions and personalities made them come off as completely different people. And to have Tasslehoff behave completely out of character simply to satisfy a plotline--ugh. Absolutely angering. The adventure was a decent one, and I was about to enjoy it now as an adult, but I feel that the author could have taken more time with the original cast of Dragonlance and done a better job. Sep 21, Ubiquitousbastard rated it really liked it Shelves: fantasy , high-fantasy , wizards-mages , favorite-character.

I'll probably go reread this, because sometimes I like ridiculous, silly awesome fantasy. Jul 28, Tim rated it really liked it Shelves: dragonlance , fantasy , reviewed , own. This review has been hidden because it contains spoilers.